Meet Monique Matthews, Writer of ‘A Holiday in Harlem’ 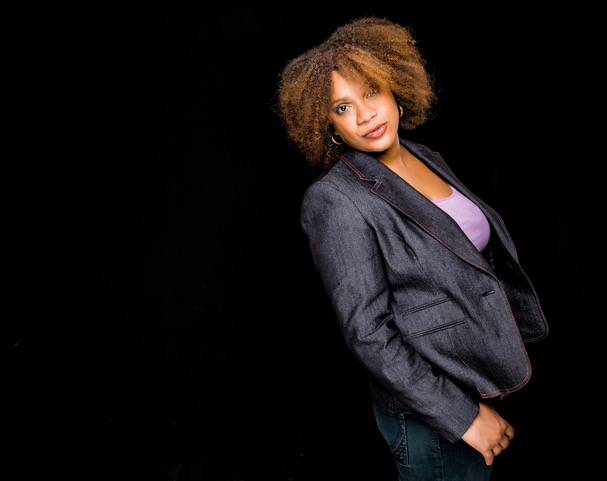 Monique Matthews wears many hats: producer, screenwriting professor, and brilliant writer. Not to mention, she’s one of Daily Variety’s 10 Writers to Watch and a semi-finalist in Sundance New Voices. BGN had the opportunity to speak with Matthews via telephone to discuss her latest film A Holiday in Harlem and what it means to be a Black woman creator.

A Holiday in Harlem is such a relatable film for everyone, especially the mac-and-cheese scene, which is like a rite of passage for Jasmine’s character. Tell us more about how this scene came about, as well as what inspired you to write the film.

That’s the one scene that means so much to me. This is one of the first culturally specific films that the Hallmark Channel has done. I’m often asked questions about diversity versus inclusion, and I’m one that separates the two. For me, diversity means there is only one main way to tell a story. It’s like the television show Friends; Living Single was the “diverse” version of Friends in our culture. In an inclusive world, you can have six friends from Brooklyn and six friends from Manhattan, and both stories are equally weighted.

With storytelling in general, the more specific you do something the more universal it actually becomes. I had so many people say to me, “Oh wow, I watch the Hallmark Channel with my mom every year!” I realized it was a such a fun, family-communal experience, and I wanted a scene that spoke to generations. I wanted mother-daughter-grandmother in that scene. From my cultural experience as an African American, grandmothers are very sacred. Then I realized in the larger American setting, recipes and family gatherings are something we all share.

The inclusive aspect of the mac-and-cheese scene might specifically speak to the Black cultural experience, but it also speaks to the larger American celebration of holidays because we love family recipes. It is really a rite of passage for the protagonist Jasmine. She becomes an adult in this scene as they teach her the recipe. I knew that I wanted something that would speak to everyone while giving a specific cultural nod to us.

I’m always interested in how other writers maneuver through the world and their journey. Have you always wanted to be a writer?

You know, I have always been lost in words. I am just in love with dialogue. Growing up, I would quote movies all the time, based upon dialogue. It wasn’t the acting but always the words. I’ve done all types of writing. My mother would get frustrated and say, “Why can’t you just do a regular job?” Even if I was sitting at a desk, I would just get lost in words and daydream. It’s something that I’ve always done, standing up for what was inside of me. I wasn’t trying to break rules, I just saw things differently. I wanted to honor that.

What is the level of responsibility that you feel you have as a creator to speak about things going on in the world? How do you incorporate that into your work?

As a creator, I think you should really create what’s in you. I’ll always argue for the humanity of African Americans. We can do anything, and we should be able to be shown in any way. We don’t always have that. If we had the opportunity to just show more images of us, then it would be balanced out. I wrote A Holiday in Harlem to be an escape. There are a lot of serious things going on, and that’s why I believe in joy. Some people may say that I should be more serious. That is serious — that we can be joyful and celebrate what makes us happy and loving each other. This is something that we don’t see — a Christmas movie set in the hood? It was really important for me to show that there is more to our story than just destruction and devastation. There is love. That’s why people are still surviving, because we love each other.

Many Black women find themselves navigating in predominantly white spaces — in the arts, in education, in business, etc. — and it can be lonely and sometimes hurtful. What advice would you give about staying true to yourself and thriving in those spaces?

I’d like to share my experience with A Holiday in Harlem. I was quite frankly afraid, because the Hallmark Channel does not have a reputation for having culturally specific films. They’ve certainly had African American actors in their movies. But they haven’t had a history of Black creatives, writers, and directors. They’ve been working on that, which I am a part of, so I am grateful for the opportunity. When you are one of a few, you are naturally concerned about what happens when conflict happens. You’re questioning what the conflict means.

One of the things I did was that every time there was a question back-and-forth, I put it into the script. If they asked a question, it was for a reason. Do I feel defensive, or is this really a story question? If it’s not, how can I make it one? For example, I wanted to reference chicken and waffles in the film. It’s not just because it’s soul food, but Harlem is where it was created. They asked me if there were any other types of food in Harlem. Yes, there are! Them asking me that question caused me to think how I can take the question and expand it. In the film, that is a huge turning point moment when the protagonist Jasmine decides, “We’ll take all of the food in Harlem!” It becomes a huge moment in the film.

For me as a writer, rather than avoid conflict as an only Black woman working in a space, I use that to enhance the storytelling. I take it and make it into a better story. As a writer, I’m always trying to figure out what moves my writing. All of my writing from growing up in Harlem and living in Los Angeles — I call it the “flight of the bumblebee.” Anatomically, the bee is not supposed to fly and yet it does. For me, that’s what it’s all about.

A Holiday in Harlem is available now on the Hallmark Channel.